Here is a short summary and a sharp graphic, excerpted from the most recent installment of my ongoing Time in Memory project, which was posted on May 8, 2016. I am hoping to squeeze out a few follow-up posts in the near future, so here is your refresher:

Because memory is constructive, a storyline (a mnemonic fabula in chronological sequence) must be reassembled from preserved bits of story content. When that content is informationally “redundant”, the story structure can be reconstructed more efficiently, which explains why some types of narrative sequences typically seem more coherent than others: Chronicles (type 1) are incoherent because their informational content is predominantly random; Biographies (type 2) find modest coherence by representing familiar patterns; Emplotments (type 3) maximize coherence with content that seems entirely predictable, when viewed in retrospect. By examining all three of these types together, we may say that informational redundancy is generally low for Chronicles, intermediate for Biographies, and high for Emplotments. This broad comparison suggests that coherence is not only relative, but hypothetically measurable, if only by theorizing a continuum of redundancy against which all possible storylines might collectively form a standard. If coherence is rememberability, and mnemonic reconstruction depends on informational redundancy, then the ideal coherence of a given storyline can be estimated according to the predictive (statistical) regularities in the data stream which an audience must recall and mnemonically (re)sequence. When the ideal remembering of a linear fabula is successful, that storyline’s level of coherence will correspond to the degree of “Narrative Redundancy” provided by story content.

The concept of Narrative Redundancy provides a hypothetical means for “measuring” the coherence of storylines - albeit measurement must be merely comparative for the moment, in lieu of developing calculable standards. In theory, every possible storyline might be charted at some point along a statistical spectrum, somewhere between random and predictable, between chaotic and ordered, between complicated and simplified. If Chronicles are generally random, Life Stories are generally patterned, and Emplotments are generally predictable (“predictable in hindsight”), the entire continuum of coherence might be reasonably visualized by employing the following graphic. 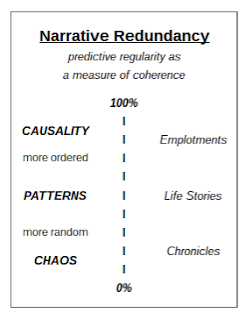 In today’s post we have primarily considered the top end and bottom end of this proposed spectrum.
In my next post I will attempt to justify the middle range of this continuum by considering the statistical nature of familiar serial patterns. All that biographical expertise may have chunked these patterns as singular units, but the “unpacking” of those unit-ized chunks is still a serial pattern…
And a pattern can be understood as a collection of probabilities.
Anon...
Posted by Bill Heroman on March 04, 2017
Email ThisBlogThis!Share to TwitterShare to FacebookShare to Pinterest