Curating Art - and my NT/History projects

Any blogger gets out there.  Great stuff gets re-shared.  Any writer can now publish an e-book.  Only great stuff will get word-of-mouth.  At least, that's one way of looking at things.

At a recent 50th Anniversary party, a dozen people were snapping digital pictures of my family, as we stood in the staging area.  The family had hired a professional photographer for the event, and all these digital hacks were surrounding the pro.  Here is one of the pictures a niece took: 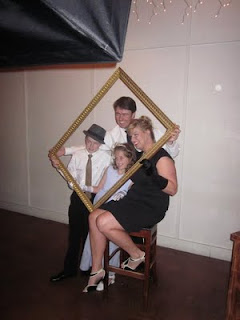 And that's a nice memory indeed.  But then, again, here's the image Dana Heckler produced, from her shot, taken at about the same moment: 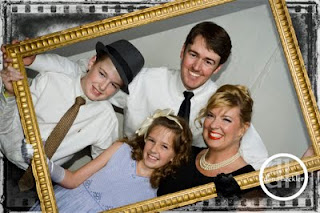 And THAT, if I do say so myself, is a wonderful memory captured within a beautiful portrait.

My point today is that this illustrates precisely what artists (and writers) are facing as the marketplace of ideas integrates more fully with the digital age.  Anyone can snap a pic.  Anyone can write a blog.  But not everyone can make ART that is equally compelling.

A friend of mine helps run the Professional Photographers Association in Atlanta, GA, and it's an interesting time for their business.  On the one hand, the technology has made entry into the profession easier than ever.  PPA's membership has soared in recent years, but the pros are now struggling to sell themselves.  Why hire somebody who costs money, when your cousin has a laptop and twelve megapixels, or whatever?  Why?  That second photo, above.  That's why.  That is, IF you want quality.

By the way, yes this is getting back to my usual themes around here.  Just gimme one minute more.

Seth Godin has influenced me more in the past several months of my life than probably anyone else.  It's not just that he's a brilliant marketing guru, it's that he's a visionary about interpersonal dynamics and he talks about the interplay between business and art.  For as long as I can remember, I've wanted to write books and sell them.  Here, in May of 2011, the book business is ON it's most dramatic tipping point in probably 500 years.  And where major Publishing Houses are no longer the exclusive gatekeepers they used to be, the alternative - being a lone voice out here in the ether - hasn't been smashingly effective just yet, either.

In Biblical Studies Land, in particular, this blog provided me with access into the biblio-blogosphere at large, which allowed me to greet, meet and get to know scholars and grad students from around the world.  Five years ago, I knew my observations and ideas about were worth sharing.  Having been picked up, shared and linked to several times since then, I still believe there's more work to be done.  But I've met people.  I've posted most of what I'm prepared to post, and I've tried to find out whether blog posts can be useful to any extent, for accomplishing things, for having an impact on the conversation, for History's sake.

But I think one reason I took this night job seven weeks ago is because - of the many other ways in which it was simply good timing - it was also good timing for me here, with the blogging.  I think I needed an excuse to make a break here.  And although there's still much that I'd like to do going forward - many topics on which I'd like to focus on and ruminate about here, both in Paul, Acts & the Gospels - there's probably a greater need for me to focus on polishing up some of my earlier work.  Blog posts can be great, but a book is a whole other level of work, and potentially, a whole other level of effectiveness.


I rarely meet a person who says, “that movie changed my life.” Or, “your blog post transformed me.” I’m not diminishing either of these. Both of their place in inspiring, educating, and entertaining others.// But there is just something about a book changes everything. I have met thousands of people through the years who have reported, “That book changed my life.” I can certainly point to the books that have shaped my own life. In fact, we can point to specific books throughout history that have changed entire civilizations.

And I can't get around that.  A book is much more than a blog.  A blog is - at best - one voice added to several conversations.  This blog hasn't yet started much significant conversation.  Books START conversations, and they do it in spades.  But they need to be GOOD.

When I moved to Atlanta in 1996, I was hoping our churchlife experiment there would have an impact on changing the future of Church History. When I quit doing house church in 2005 and in 2007, I was hoping my time spent on research and writing would help make an impact on the way we think about primordial Church History. And if I do *(mostly)* quit blogging here, soon, it ought to be for the same reasons.

I started "biblio-blogging" in April of 2008 to get feedback. After three years interacting with Biblical scholars, I'm convinced it's now time to do more. The one manuscript I finished in 2009 had been fully first-drafted by December of 2007. Since then, I tried to revise it, make the right preface for it, add the right footnotes and/or appendices. Wrong idea. It never quite worked. That's why it stayed in the box on my shelf, where it should be.

But the time has now come where I need to get serious about putting out a book GOOD ENOUGH to make the impact at SBL that I absolutely believe DOES very much need to be made.

Any idiot can write a whole book. Any friend with a laptop or digital camera can create "art". But can _I_ do what Dana Heckler did? Can I make _my_ art so much obviously better than what others have done on the topic(s), that it will get word of mouth, make a difference, provoke NEW conversations, and inspire change? I sure hope so.

Perhaps we shall see.
Posted by Bill Heroman on May 08, 2011
Email ThisBlogThis!Share to TwitterShare to FacebookShare to Pinterest

Bill,
I think you are right. It's all about priorities, about only being able to use time (or money or energy) once. And I do believe that your ideas and insights are worth publishing.
I will sure take a lot of effort to make it into the quality book you blog about. But I am convinced it will be worth the effort. Regrettably I do not have the truck load of money to help....

LOL! That's okay, Eric. Your support in all ways has been more than tremendous.

Thanks for the encouragement, brother.

Go for it. I think your ideas are worth publishing and I would love to see them together in book form. Once I discovered your blog around the time of SBL last year I've searched to find your thoughts on different things!

You've encouraged me to get my rear in gear and do something too (like, finish my MA! ;-)

Thanks, Matthew. That means more to me this morning than words can say.

All text on this site copyright 2020 by Bill Heroman, but publishable ideas may be given away "free to good homes". Contact for details.

"If I have ever made any valuable discoveries, it has been owing more to patient observation than to any other reason."
-- Sir Isaac Newton