on Sculpting Motion, or Narrating the Past

Quoting Jean-Paul Sartre in his conclusion of That Noble Dream (1988), Peter Novick caps his breathtaking survey of the objectivity crisis among historians by returning us to the ironic futility of language, where we nevertheless celebrate the efficacy of rhetoric and poetics. To do this, Novick not only cedes the last word in his own book to another, but invites readers to claim a still higher authority.

"In the domain of expression," Jean-Paul Sartre once told an interviewer, "success is necessarily failure." He wrote of how "it is impossible to succeed, since at the outset you set yourself the goal of failure (to capture movement in immobile objects, for instance)."

"The moment comes when you just can't take the work any further... you can throw your piece of sculpture in the rubbish bin or exhibit it in a gallery. So there it is. You never quite grasp what you set out to achieve. And then suddenly it's a statue or a book. The opposite of what you wanted. If its faults are inscribed methodically in the negative which you present to the public, they at least point to what it might have been. And the spectator becomes the real sculptor, fashioning his model in thin air, or reading the book between the lines." [Sartre, Between Existentialism and Marxism (1974; 1976).]

In Oakley, Kansas, there's a massive statue of Buffalo Bill Cody chasing down one of his namesake. The illusion of movement is not, in my humble opinion, best captured by this featured image from the local cultural center's website. 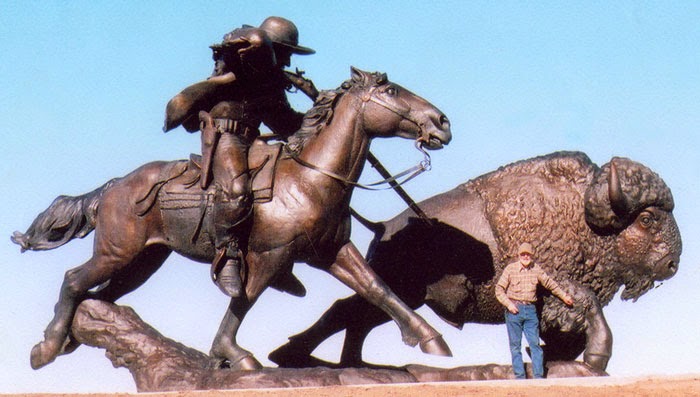 However, the reason I know of this statue at all is that I've had the experience. One day last year, while hauling forty-thousand pounds of beef from Dodge City, Kansas, to Ogallala, Nebraska, I made a right turn somewhere in Oakley and saw a more startling image. As the truck made the corner, as *I* moved, changing direction rapidly from west to north facing, and scanning my eyes back and forth around the intersection, I was startled by this statue, up ahead on the left.

I could tell immediately that it was a statue, but I did have to tell that to myself. As I drove closer, I drove slower, and kept glancing left, because it really and truly appeared to be moving. The angle I got was very nearly this one I found on the web: 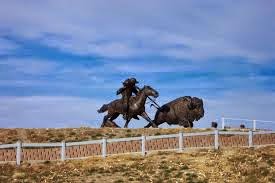 I also like this professional shot (go buy his books, please)... 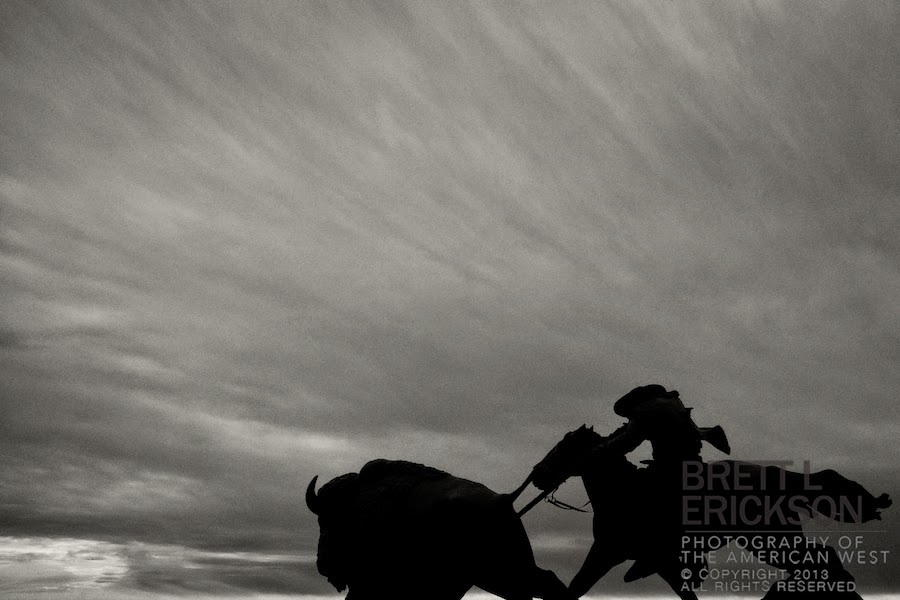 ...and there are many more angles worth viewing on a Google image search.

Oh, but I have not yet drawn together the point, have I?

What does this have to do with narrating the past, or the writing of History?

Oh, dear reader. Read between the lines...
Posted by Bill Heroman on May 24, 2014
Email ThisBlogThis!Share to TwitterShare to FacebookShare to Pinterest

Reconstruction of Thessalonica in 51 CE Click on this hillside to visit my early research project (2001-2006) at www.Thessalonica.Net
Bill Heroman | Create Your Badge

All text on this site copyright 2022 by Bill Heroman, but publishable ideas may be given away "free to good homes". Contact for details.

Still need MORE cowbell? For links to 600+ Biblical Studies Blogs (and related content), click here. Just, ah, buckle up first!
"If I have ever made any valuable discoveries, it has been owing more to patient observation than to any other reason."
-- Sir Isaac Newton