Which painting best represents what horses are actually like?

Is it one of these five? 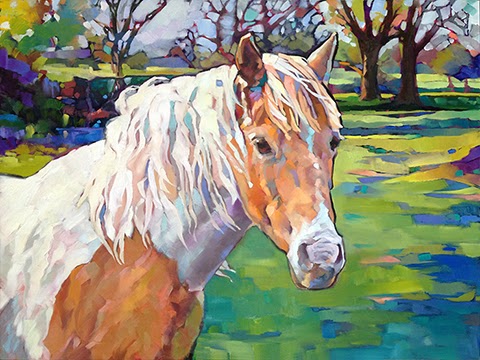 Or is it this one?

The sophisticated answer might be that each painting portrays different aspects of what a horse is like. But how is this true? The most fantastical one, with the wings, provides the most detail, appears three dimensional, and shows realistic flowing hair and muscle definition and shading. In contrast, the first five don't arguably show what a horse "actually" looks like, not even in my mind's eye, and perhaps not even in the painter's "actual" imagination.

Then again, in terms of "realism" the impressionist horses most definitely possess the distinct and inarguably realistic advantage of NOT adding wings.

For an interesting parallel, consider American History. The fake founding fathers, all proper evangelical biblicists, are nevertheless a "real history" to some degree or another in the mind of propagandist David Barton. No matter how much he lied to himself to convince himself of that view, those false facts have become a real impression in his mind, at least whenever he's selling it. Just as one of those electric pastel horses (above) may exist somewhat "actually" in the eye of the beholder who painted it, so the crazy revisionism of David Barton has managed to exist somewhat realistically in the minds of his most fervent readers. That history, so to speak, is both impressionistic AND it adds wings - seriously, awful, terrible, unreal, evil wings.

Let's suppose the ideal history would be realistic AND NOT add wings. Unfortunately, there are plenty of times when you can't quite decide which is which...

Personally, given the choice between Gene Edward's First Century Diaries and Frank Viola's Untold Story of the New Testament Church, I would still choose the fiction, any day of the week, and ten times on Saturday night. What I mean is, while it's unfortunate that I can't recommend either one of these authors to you, dear blog readers, what I can say is that the heart and soul of Gene's fictional diaries did ring true in my spirit. It presented an impression of Pauls' vision and ministry that was fruitful for contemplation without requiring factual argument. It wasn't enough for me, as it obviously wasn't a History, but it was nevertheless a beautifully artistic rendition of what Paul's historical ministry very well might have been like.

In contrast, the bald faced "non-fiction" of Viola's authoritarian compilation simply presents itself as a parade of fact claims that demand to be accepted. It has the semblance of realism but no basis for trust. There is chronology without contingency, and "history" without analysis or discussion. To me, it also seems to have no soul. It presents a chain of events, but it weaves together no narratives. It lacks perspective, and artistry. It adds realistic details, as reliable as hearsay, and it purports everything plainly with no hint of an argument. In short, it has hooves and tail hair and knee bones and teeth... but it has no way for anyone to determine whether any of those details might as well be fantastical wings. As a matter of fact, many details in the book are quite false, but perhaps that's why Frank believes "The" story is legitimately "Untold".

Worst of all, this very authoritative author does not seem to have any personal vision for the New Testament Era, that is, not apart from the notion that all these details are "what happened" so they obviously somehow all contributed to the [insert grandiose adjective here] way in which God went about building his church. In fact, there are many aspects of what was happening during Century One, but each of those details have their own stories, just as God has God's own story. There's absolutely a case to be made for compiling events in a matter-of-fact chronicle format. I've done that in the past, and I aim to do it again. But a chronicle is a chronicle and a history is a history. Frank doesn't seem to know what he's doing one way or the other.

The imaginative fiction of Gene Edwards was not presentable as history, but the dubious history of Frank Viola is not presentable as anything more than self-ignorant fiction. Ironically, Frank's attempt at non-fiction may suffer most from a lack of both Art and Craft. He's tried to give us a non-imaginative narrative. Just the facts, ma'am. But for all his efforts to be thorough and exhaustive, he's copied and pasted without acknowledging his own selectivity in the process. As a result, it's the inverse of what he wants it to be. Unless, I suppose, he only wants it to sell.

At any rate, I'll take an impressionist horse over a realist Pegasus any day. And twice on Sunday.

But do thou as thou seeist fittest...
Posted by Bill Heroman on May 04, 2014
Email ThisBlogThis!Share to TwitterShare to FacebookShare to Pinterest

Reconstruction of Thessalonica in 51 CE Click on this hillside to visit my early research project (2001-2006) at www.Thessalonica.Net
Bill Heroman | Create Your Badge

All text on this site copyright 2022 by Bill Heroman, but publishable ideas may be given away "free to good homes". Contact for details.

Still need MORE cowbell? For links to 600+ Biblical Studies Blogs (and related content), click here. Just, ah, buckle up first!
"If I have ever made any valuable discoveries, it has been owing more to patient observation than to any other reason."
-- Sir Isaac Newton