is absolutely delightful reading. Check it out: The Resurrection of Jesus: A New Historiographical Approach

. My initial review, after the jump: 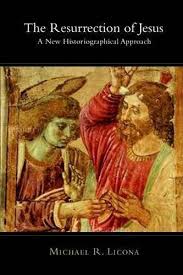 Now, please note that my lead in, above, was meant very precisely. It is Michael R. Licona's HISTORIOGRAPHY - that is, his discussion of History and the Historians' task - which makes up the bulk of the book, and which is what I'm enjoying the most.

For starters, here's my summary of his summary & conclusion:

Historians argue and weigh evidence about what hypothesis might best explain certain evidences. That is good historiography in any field of secular history.  Now, in this case, the "facts past doubting" which nearly all scholars acknowledge as historical (and Licona lists three) are best explained by the hypothesis that Jesus was actually, physically resurrected. Furthermore, when compared with alternative explanations, the resurrection hypothesis (RH) proves strongest by far. Thus, barring future discoveries, Licona contends that "we may declare that Jesus' resurrection is 'very certain', a rendering higher on the spectrum of historical certainty than I had expected."

My response? Yes, Amen, and Absolutely yes. That's how history works. That's may be the *most* any proper Historian can say, but YES, proper Historians CAN say so much, albeit some with more personal confidence than others.

(1) We already knew this. As long as resurrection isn't ruled out a priori, it's the best explanation for everything the apostles did (and also for what Paul did) after Jesus' death. Of course it is. Seriously, this really is very old news.

(2) It must be acknowledged that Licona *is* actively engaged with apologetic efforts, at large. While I don't think this vocation weakens his particular arguments in the least, it's clear that his goal must have been, from the outset, "to defend the faith once delivered".  And again, that's fine.  But this is why it's Licona's exquisite discussion of what makes good historiography that I'd sell as this book's strongest value. But then, personally, I didn't need more support for my own pre-existing beliefs.

(3) Despite (again, and again) my huge appreciation of Licona's methodology and approach, the book as a whole remains yet another example of a conservative Jesus history which *concludes* with a positive judgment about *historicity* - See, brethren, we can still believe that it's all really true!  And on that, frankly, Amen.  But regular readers know my bias here. These gosh-darn conservatives only care about historicity. For all Licona's wonderful work on historiography, and his extraordinarily rigorous investigation of this (supremely significant) event, he still hasn't set out to reconstruct any actual History.

As I often say here, I am eager to see more.  Much, much more.

But, on that last quote, I must also say:

I would like to see Mike Licona wrestle, in print, with those final two questions... not as a theologian, but, to whatever extent possible, if possible, as a Historian. If he took another ten years on that question, who knows what kind of spiritual historiography we might begin to pioneer. Yes, I suggest that we might be able to investigate GOD, historiographically.

Stranger things have occurred, after all.  ;-)
Posted by Bill Heroman on December 02, 2010
Email ThisBlogThis!Share to TwitterShare to FacebookShare to Pinterest

This is one of the books at the top of my to read asap list.

Good. Then I'll hope to see a post of awesome on it, very soon.